Welcome to the My Brother is Done For Wiki

お兄ちゃんはおしまい / MY BROTHER IS ACTUALLY MY SISTER WIKI

A self-published Doujinshi Web Manga presented by Grinp-Circle. Created and drawn byNekotoufu. Published in Japan by Ichijinsha. Translated into English by Nazdrovie. Processed with scanlations in 2017. Raws prepped by Unbreakable and others. Typesetting by Loaded Porpoise and others. Uploading, editing, and typesetting to MangaDex by CoolOtamegane. Additional wiki text upgrades and wiki information by Lost the Game.

Onii-chan is Done For took 5th place in the Tsugi Manga Awards competition in the category of 'Webmanga'.

FUN FACTS ABOUT THE TITLE---

The title of this doujinshi---Onii-chan wa Oshimai---is actually a pun [ a joke ], or a play on words. When in Japanese Kanji script, " Oshimai " literally means " the end " or " it's over ", or " done for " or similar. But if the title is read in Japanese Hiragana script, we can look at the " Oshimai " part and read it as " [O] Shimai ", which literally means " Sisters " .

Teenager Mahiro Oyama is in every sense of the word a loser. No job. No school attendance. No ambition. No goals. No will to live. They have confined themselves to their room for quite some time now, two years in fact, doing nothing but eating, playing eroge video games, visiting soft-core p*rn websites, watching hentai DVD's, and sleeping. His child progeny and genius sister, Mihari Oyama, already knowing what is eating away at Mahiro's mind, heart, and soul, desperately wants to help her older 'brother' in any way that she can. So, using her impressive and unconventional 'Mad Scientist' skills in human biology and genetics, she does something quite unusual. Something that is destined to be for Mahiro's own good and change their life forever. She begins transitioning 'him' from an unhappy, miserable, worthless teenage boy, into a cute, attractive, cheerful teenage girl ! 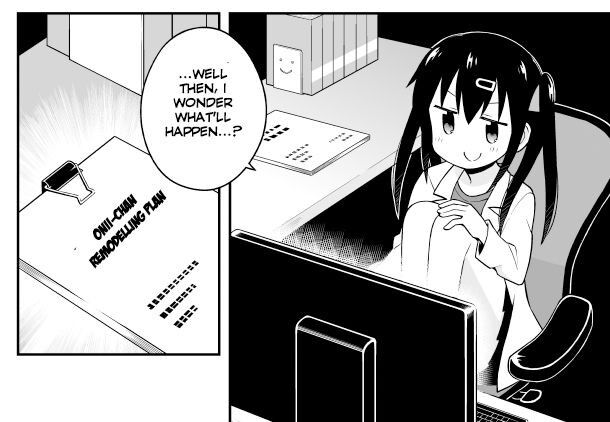 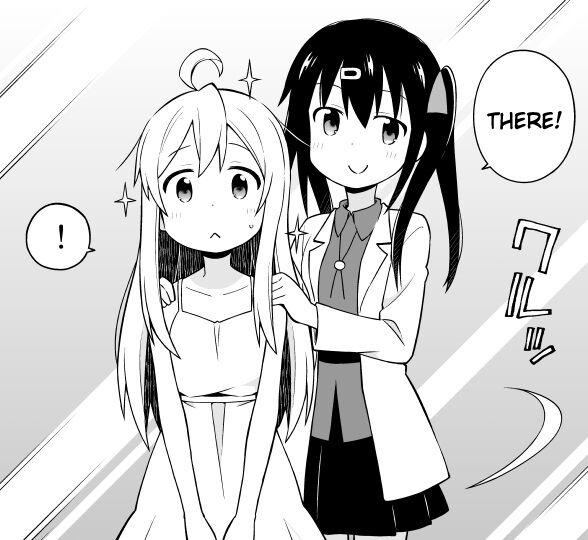 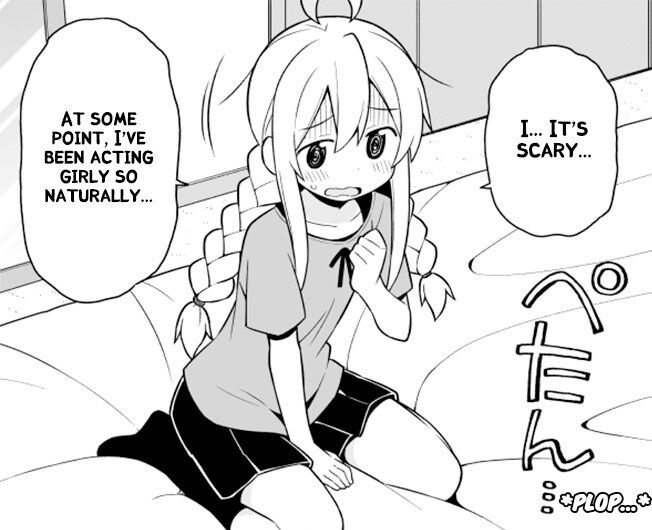 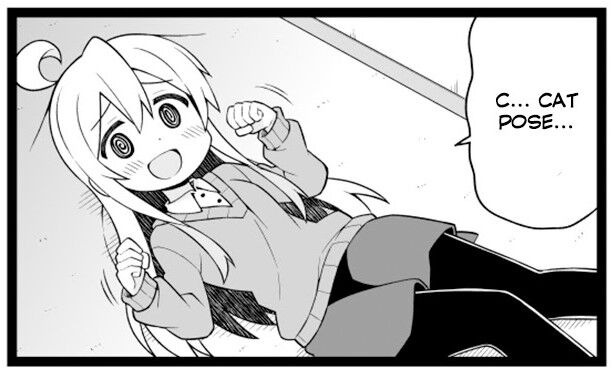 The M to F Transition

Girls Will Be Girls

There can not be any greater contrast between a blood related 'brother' and sister then there was between Mihari Oyama, the sister, and Mahiro Oyama, the 'brother'. Mihari was seemingly born a child genius. At a very young age, she showed the natural abilities to learn quickly, retain that knowledge, and to think critically and independently. She was allowed to progress rapidly through the school system, with her subsequently passing her collage courses, and graduating, by the time she was in her mid-teens. With both of their parents gone, Mihari was even granted Mature Minor legal status, as well as Head of Household privileges, as the both of them lived together in their own house (*). Mihari's major in collage was in human biology and human genetics. But sometimes such genius comes with a high price; Mihari takes on an unusual appearance as well as an unusual personality. She wears lab clothes all the time, that is, a cami-style shirt, a pleated mini-skirt, and a lab coat to anywhere and everywhere. She reads noting but scientific journals and peer reviewed research papers. Mihari also seems to delight in taking on the persona of that of a 'mad scientist', and would do unusual and unheard of independent exploration, research, and experimentation into a variety of scientific topics.

Mihari's brother, Mahiro, was almost the complete opposite in his abilities and attitude toward life. Mihari noticed that her 'brother' was born perceived as a male, but was somehow 'different' from what could be thought of as a 'typical' young boy. It took years for Mihari to figure out what was different about Mahiro, especially so because they would never broach the subject, or talk about their deep, inward feelings. When Mahiro began to go through puberty, their life began to spiral downward. He quit going to school. He never developed any close friends. He avoided any social contact with anyone other than Mihari. He was intelligent, but never applied himself to anything useful. He became recluse, spending more and more of his time in his bedroom, playing video games, watching DVD's, and surfing the Internet.

Finally, after the two siblings had been raised together for all those years, Mihari was able to discern what was troubling Mahiro. Mahiro was born as a transgender person, born perceived a male, but with their correct gender identity being that of a female. With Mahiro's puberty bringing an onslaught of changes to their body that were masculine in nature, one day he remorsefully confessed to his sister that he wished that he had been born as a female bodied person, and be able to go through a female puberty, all because their gender identity was, and always has been, female ! However, although he has known for quite some time that transgender persons can transition to their correct gender through a variety of means, they were never able to bring themselves to even consider doing so, let alone actually beginning to transition. As Mahiro's self-confidence and self-worth began to sink lower and lower, and their quality of life decreasing with every month that went by, Mihari knew that she had to do something drastic to remedy her 'brother's' situation, or that situation would surely lead to consideration of a suicide, as is the case with so many teenage transgender persons. Mihari would have to help her 'brother' to transition to their correct gender of a female teenager, but without any help from him at all. Mihari must do it for his own eternal welfare and good well being. . . . elsewise, the unthinkable will happen---My Brother is Done For !!!

(*) Implied by the story line and context.

A Skilled Manga Critic Reviews My Brother is Done For

Looking for the best gender bender manga? Well this is the one! You have made the right choice to visit the manga's [Wiki] page.

I had fun reading this manga, the plot is fine, not that unique though. It shows us what being something you're not is like and it's fun! Sometimes I wish I had a life like his. This manga really changed the way I am in real life, it made me think of how I am and what I do. This [manga] is teaching us on what a girl's life is, and it really helped me. Now I know why my hair's messy all the time, and other stuff like that. Like stuff for clothes, and others. This also let me know how to communicate with others, and how to speak to people and become friends with them. To me, this manga is a life changing one. I don't know [about] you, but this manga changed my life, this is the best.

So this is the story of a NEET- *ahem* "In-Home Security Guard"! He was a useless member of the society so to fix that can you guess what his sister did? She drugged him and turned him into a girl (yes, you read that right, physically he/she became a 100% girl)

So this is their daily life of turning the NEET into a normal human. The art is fine, story is enjoyable enough for a weekly or even a binge read, characters are like you'd expect (not that I have any problem with it). Our M[ain] C[haracter] is developing towards becoming a normal member of society. If you let go of Science for a bit, then Enjoyment is plenty. So in the scenario of you having 3-4 hour of free time, I'd recommend to check this [manga] out.

About the art style, I'd give it a 9/10 rating. Why? Because well, the designs are cute and also the main character is too. It is highly detailed and no errors were found when I was reading. It's perfect for me. The jokes were funny. I hope this manga will get an Anime adaptation. Overall, I give it a 8.5/10 ! I enjoyed reading this manga, thanks for taking your time to read my review!

Meet All the Characters of My Brother is Done For

My Brother is Done For placed third (3rd), and was awarded the Bronze Medal, in the annual Anime Japan 2020 contest " Manga We Want to See Animated ". The contest involved the voting done by the manga fans themselves between Feb 1st and Feb 16th, 2020. The contest recorded the top 10 official placements, with My Brother is Done For taking third, quite the accomplishment ! Note that the Official Description of the manga lists My Brother is Done For as a transgender themed ( lit. transsexual ) web manga, adding further evidence that the Main Character, Mahiro Oyama, is indeed a male-to-female transgender teenager.

Additional information about My Brother is Done For

The creator and manga artist for My Brother is Done For, Nekotoufu, their pixiv can be found below---

This Wikia, based on the doujinshi manga My Brother is Done For is a transgender-themed wiki, and may not be suitable for children or pre-teens. READER DISCRETION IS ADVISED !!! This doujinshi webmanga will be retold in this Wikia, chapter by chapter, in English by a manga fan that is a transgender person herself. This entire " fan's style " fanon Wikia will feature highlights, commentary, opinion, positive transgender viewpoints, and additional new material presented in the true spirit of creative doujinshi manga storytelling. Because the doujinshi manga My Brother is Done For begins with Mahiro Oyama already transitioned from a teenager perceived male at birth, to that of a cute teenage girl, this Wikia will refer to Mahiro with female pronouns consistently throughout the chapters of the manga, and throughout the character profiles. However, Mahiro will be referred to with male pronouns in the Overview and the Prologue.

The Management Positions for My Brother is Done For / Onii-chan wa Oshimia are all taken, and the editing manpower of this wikia is currently adequate. No further editing help is wanted or needed at this time, maybe later. This fan created wikia is a very specialized and narrow focused wikia, that being a transgender themed wikia, featuring positive transgender attitudes and viewpoints, and would be best to be edited by transgender people who can tell the feelings and stories of transgender persons with conviction, understanding, and compassion. However, if you still feel that you supposedly must edit on this wikia, you MUST observe these Editing Guidelines, found here.

You can also explore the larger FANDOM family of communities. Visit our Affiliated Wikis by clicking on the pictures below to be taken to the My Brother Is Done For Wiki's Officially Affiliated Wikis 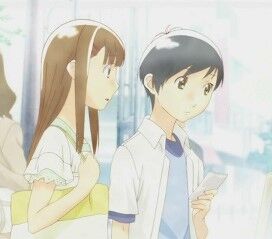 UNTIL I BECOME ME WIKI 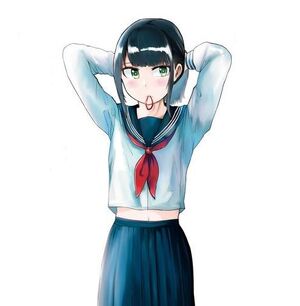 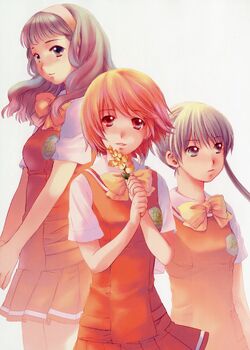 GONNA BE THE TWIN TAIL WIKI 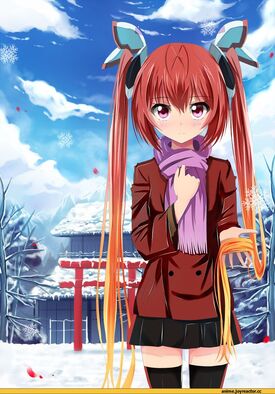 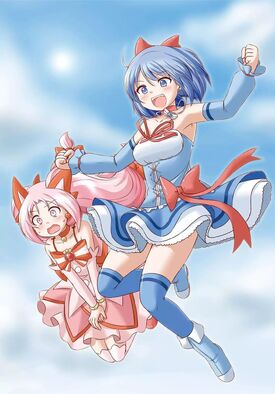 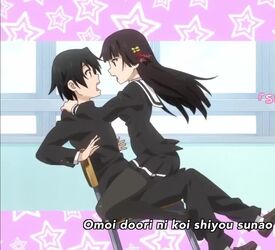 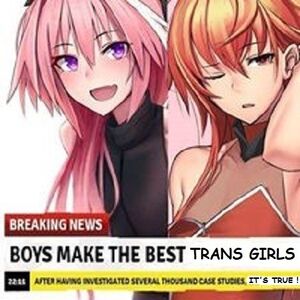 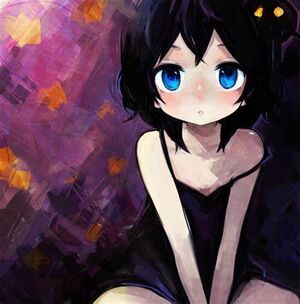